Since it’s already Thursday, most of us can’t possibly care about laatste weekend’s races much less what I have to say about them. So I’ll make this brief, then pad the rest of the post with images.

This should sum things up nicely. 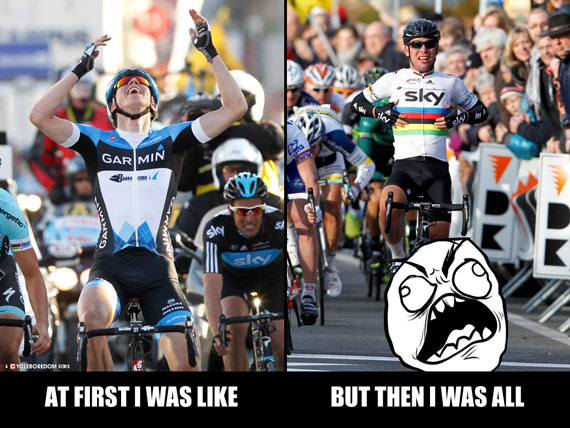 Damn good race. There wasn’t much to gripe about, unless you’re a BMC/Rabobank/Lars Boom fan. Then yeah, the race sucked. I called the BMC meltdown in my previous post, but that wasn’t a stretch. It was surprising that their main riders, Hushovd and Gilbert, were so lackluster—especially Phillipe. Not going to speculate since this was their first race together like this.

But from the inevitable moment Tom Boonen attacked on the “Boonenberg” (Taaienberg), to the surprising Sep Vanmarcke win in the sprint, the race was fantastic.

BOOM Goes the Boom on the Boonenberg

Lars had a bit of a tumble. Perhaps you may have heard something about it. 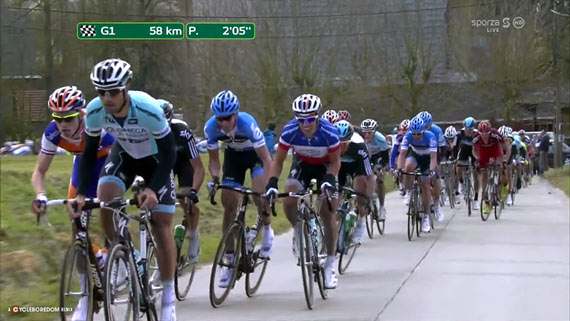 Boonen leads the groep onto the Taaienberg. Boom comes up on Tommeke’s right. 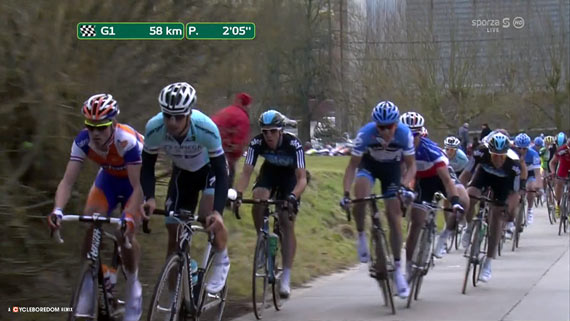 Tommeke’s feeling the Boom, plus Sep gives Sylvain a bit of a shanker! 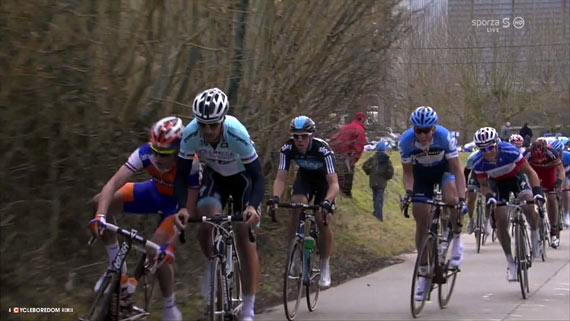 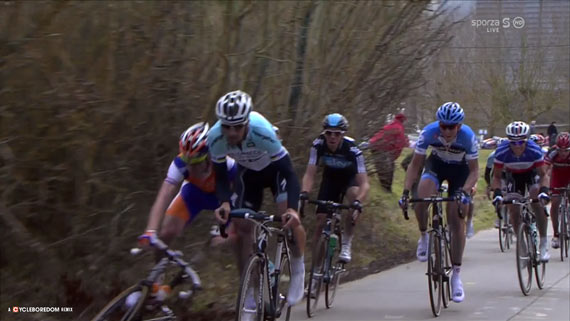 Tommeke muscles against Boom as Lars begins the dismounting process. 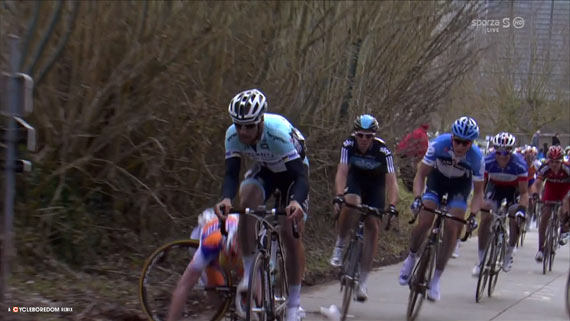 Tom wins the balance battle. Lars clears a spot for himself to sit down. 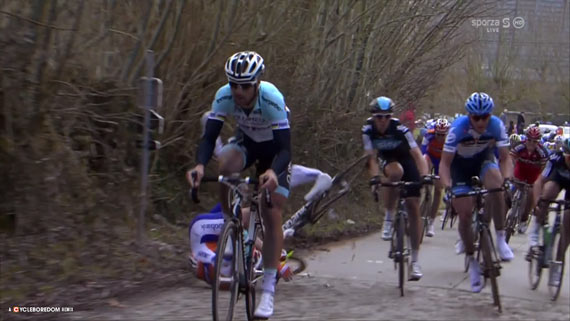 Lars detects the scent of other riders and rolls in it. His bike lashes out at a passing Skyclist. 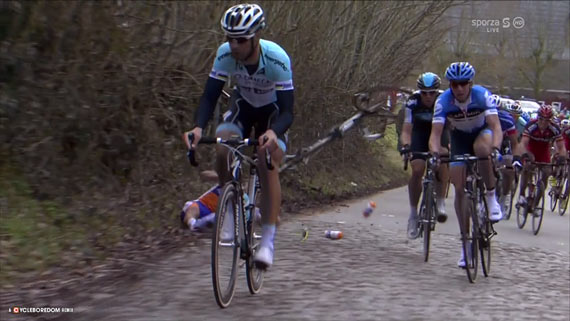 Briefly Tom thinks of looking to see if Lars is comfortable. Briefly. 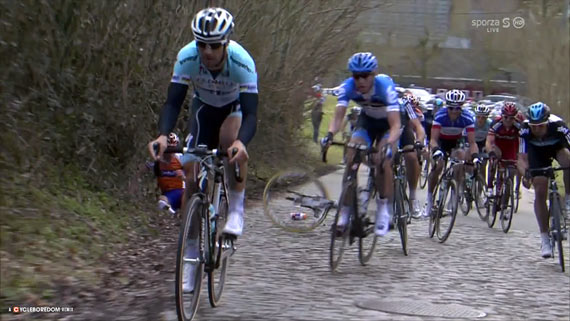 Lars has finally found the perfect spot on the Taaienberg to view the race.

To me, it looks as though Boonen simply holds his line against Boom whose rash decision to come up the inside resulted in a DNF. Luckily, Lars escaped serious injury and was able to start KBK the next day.

A few astute tweeps picked Vanmarcke as their pre-race favorite. They have now been burned for witchcraft. Sep had an incredible race. He pushed the pace, forcing the selection on three key sections: the Molenberg, the Paddestraat, and the Lange Munte. Amazingly, Boonen and Flecha allowed the Garmin-Barracuda rider to sprint from the key position—Sep thanked them with his victory salute. 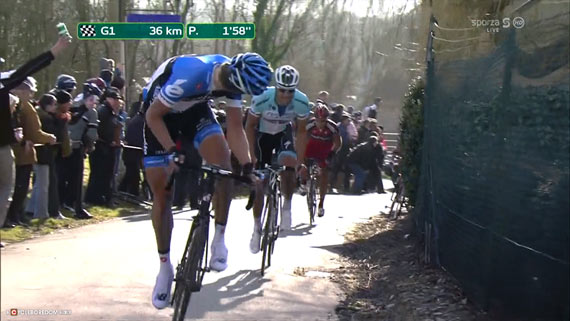 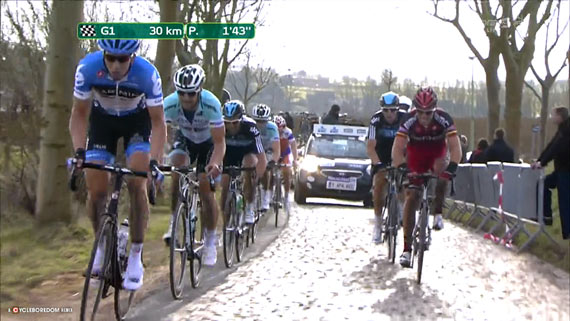 Vanmarcke pushes the pace on the Paddestraat. Hushovd is clearly struggling here. 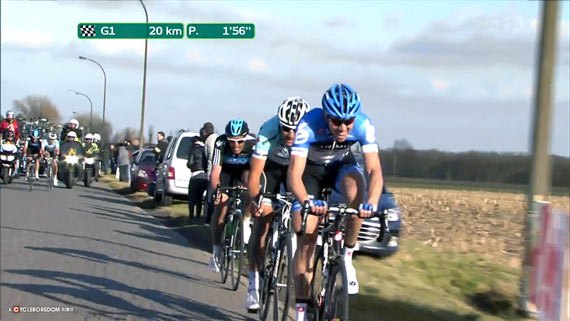 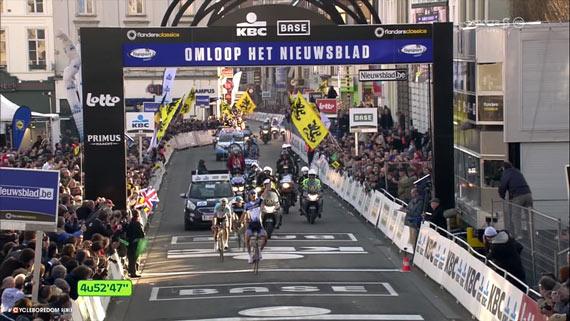 Overwinnings For Sep Vanmarcke after schooling Boonen and Flecha in the sprint. 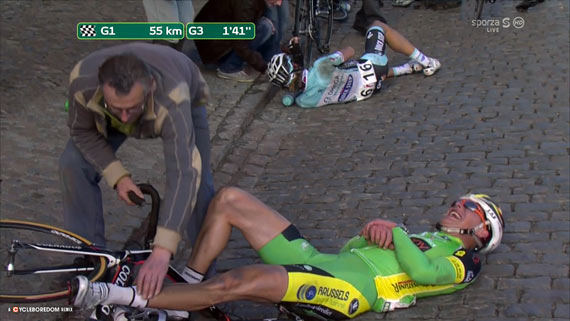 Too many hit the tarmac this day. More than I remember so in the past. 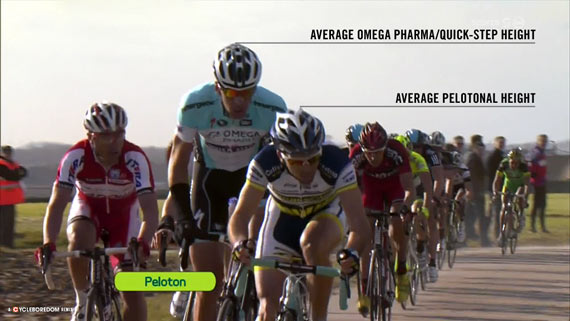 Clearly, OPQS have been height doping. Vandenbergh is a giaant.

It sucked. I bitched about KBK being a speed lottery last year, but now I’m longing for those days. All I have to say about the matter is:

THERE’S NO SPRINT TRAINS IN (semi)CLASSICS!!

How The Race Was Won™

After scouring hours of footage of the complex and multi-faceted race, I finally culled the fleeting moment born from the flutter of a butterfly’s wings: 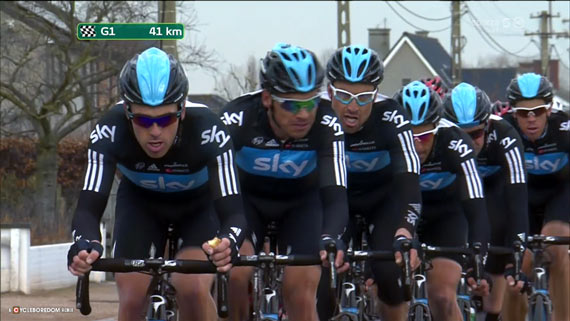 If you look closely, you’ll see the where the winning move emanated.

How The Race Was Won™ (HTRWW™) is a Cyclocosm concept and production. 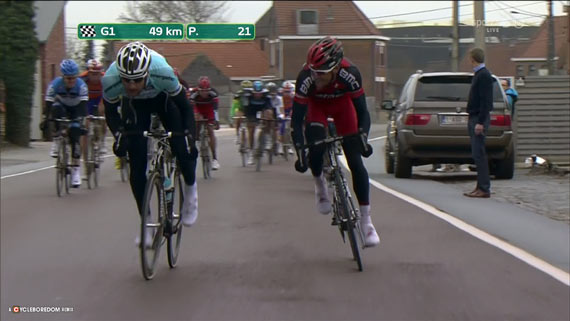 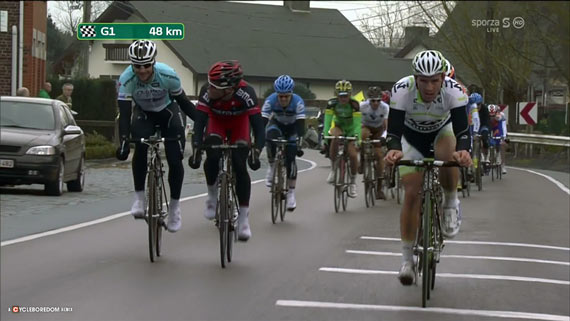 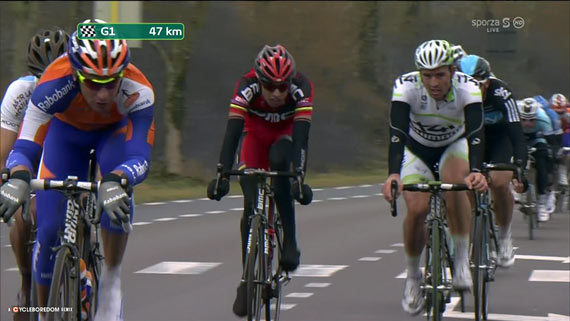 Sometimes Alessandro Ballan looks ungainly on the bike. This is one of those times.

That’s all I got patience for. I tried to get cute and add captions directly to the images, and WordPress shat a digital brick. So, now I present you this hacked together mess.