One of the first things to greet me this AM once I logged onto the world wide web, was this post on Facebook by Jered Gruber. The shot of Johan Vansummeren blazing across the cobbles of le Carrefour de l’Arbre during a photo shoot is good, yet unremarkable when compared to many of the images produced by Jered and Ashley. No, what grabbed my attention where the words included with the posted picture. Not only is the moment of the shot is perfectly portrayed by the text below, it poignantly conveys the love Johan has voor Paris-Roubaix while immediately transporting the fans of the revered race into the familiar tunnel of noise  of the live broadcast.

“We are flying down the Carrefour de l’Arbre. It’s just over freezing, and it’s almost dark. We’ve been shooting and interviewing Johan Vansummeren for most of the day on the cobbles of Roubaix. On this gloomy day, it has been about a year and eight months since his win at Roubaix, but he hasn’t given away much in terms of emotion when asked about what it feels like to retrace his steps – he did say that he didn’t feel the cobbles of the Carrefour that day. He said it felt like they weren’t even there. They disappeared for him. Whatever feelings he was guarding were brought to the fore though when we hit the Carrefour de l’Arbre – the pivotal sector of cobbles where he left his breakaway companions and went on to victory. He goes faster and faster on that long, terrible straight section to the restaurant at the quiet crossroads. 30 out of the turn, then 40, then 50kph – it’s incredible. I feel like I’m watching the race again, except I’m a bike length away. He is in his drops, his shoulders take on that characteristic lean, his grimace appears, and he doesn’t have to say a word – I know where he is. It’s not December. It’s a warm, dusty, April Sunday, and the road is packed with fans. There is an endless tunnel of noise and chaos, but it’s a blur to him as he rages by on a road with no cobbles.” 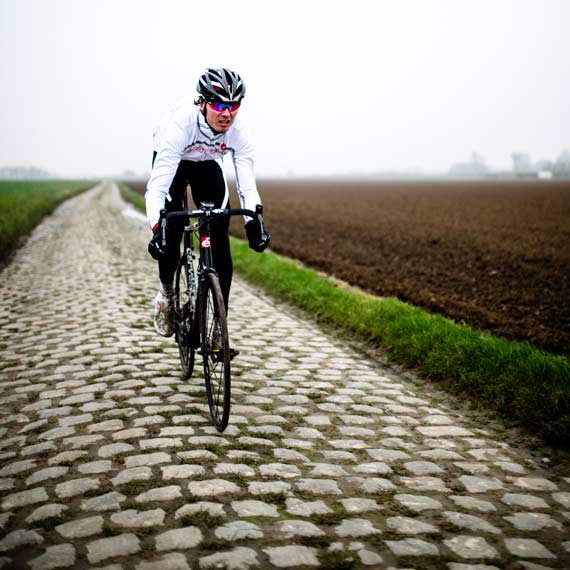 I’ve interviewed Jered and Ashley Gruber here on the site re: their photography. Definitely worth a view. You can see more of their work on their GruberImages site, and follow them on Instagram and Twitter.