Midway through the second half of the USA v GER game I see this tweet from KindHuman:

The only time worse to release a major announcement would’ve been during the moon landing. Regardless, here we are a couple days later: the Estados Unidos is advancing to the second round against Belgium and Adam F**king Myerson’s riding for KindHuman.

Myerson said, “I chose to move to KindHuman this season because I was impressed with their vision for the business, the bikes, and how to impact the sport in general. Ethics and social justice are part of the personality of the brand, and I appreciate that approach. It was also clear that KindHuman has a lot of respect for me as a person and an athlete, and values what I have to offer … It’s an opportunity to develop a long-term relationship that should extend beyond my professional career.”

KindHuman developed Myerson’s new rig, the KÜDÜ, to be a top-tier racer using high-modulus, tube-to-tube construction, oversized tube profiles and geometry suited for the toughest courses in North America. Myerson had to say about the bike, “With KindHuman, I’m excited for the opportunity to help develop a carbon ‘cross bike that does what I want it to, and be the focus of the brand’s marketing and R&D for the bike.

“I’m also excited that KindHuman is willing to buck the industry trend and keep a high-end carbon ‘cross bike with cantilevers in its line up. After a year on discs, I saw no braking advantage that was worth the weight penalty, and am looking forward to going back to a light bike that doesn’t make me groan every time I put it on my shoulder. That paint scheme is pretty hot, too.” 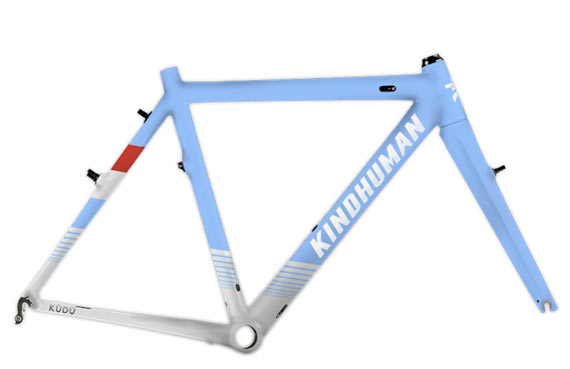 EFF-YEAH NO DISCS!! So much stoke. Looking forward to this upcoming CX season and seeing what this nieuw partnership produces.