The other day I got mad excited about some posts re: Montepeschi Strade Bianche. But, of course, I couldn’t remember when the Italian semi-classic was set to take place. Upon opening iCal I was greeted via @inrng‘s fantastic race calander with the jarring knowledge that OPENINGSKLASSIEKER IS NEXT FRIGGIN’ WEEKEND!!! WTF IS WRONG WITH ME?!

After collecting myself, I scraped some info for the upcoming races, and made meself a fancy graphic.

The Openingsklassieker weekend consists of Omloop Het Nieuwsblad (Saturday), and Kuurne-Brussel-Kuurne (Sunday). These two are the official openers for the Belgian cobbled classics, otherwise known as real bike racing.

I have yet to be able to sink my teeth into the Tours Down Under, Qatar, or Oman. Algarve doesn’t register very high me either. Q & O just seem like great ways to pad the ‘ol palmares, often having nothing to do with how the rider performs during the actual (yes, actual) season.

Known simply as “Ompoop” by those who know, Omloop Het Nieuwsblad is a proper jolt to the race heart and brain for both the fans and racers. Littered with ass-kicking kesseien, Het Nieuwsblad is a Classics appetizer but one of those monstrous appetizers from those fat-farm ‘Merican restaurants the double-wides like to waddle into. It’s early, it’s cold, and more often than not the weather is pure stront. And by stront I mean awesome. It should be noted it’s one of the first races of the season where the parcours isn’t lined with bewildered onlookers. Nor does it feature animal cuddling and/or straddling.

Looking at the start list, BMC obviously jumps out at you. The team’s selected Phillipe Gilbert as their protected rider, but almost EVERY ONE of them could win a classic—Michael Schär being the unknown. They’ll be up against a rejuvenated (media-dubbed) Tom Boonen (Omega Pharma – QuickStep), and last year’s winnaar Sebastian Langeveld, now riding for GreenEdge. I’m giddy with anticipation at the prospect of a complete meltdown, or a BMC podium sweep—either would be delightful. 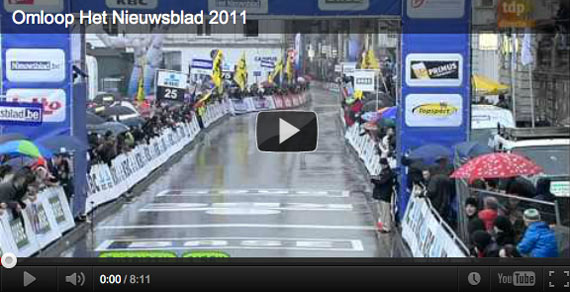 Annnnd then there’s KBK. Kuurne-Brussel-Kuurne is the consolation prize of the weekend. Even though it hits several cobbled bergs, including the Oude Kwaremont, it unfortunately often ends in a mass sprint. And that doesn’t taste very Belgian.

A veritable crapload of sprinters

The start list confirms my suspicions—the pelotonal fast guys are targeting this one. Just look at a few of these names: Mark Cavendish (Sky Procycling), Andre Greipel (Lotto – Belisol Team), Mark Renshaw (Rabobank Cycling Team), and Tyler Farrar (Garmin – Barracuda). Last year’s winnaar Chris Sutton is taking the role of Wiggins for the day as everything will be sacrificed to get Cav to the line with a shot.